On the road in the former Indochina 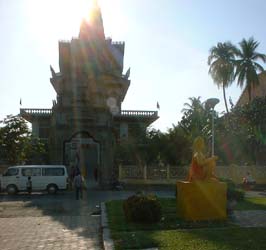 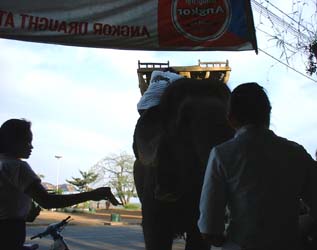 The Buddha at upper left sits in front of one of Phnom Penh's main temples adjacent to the national palace. Like the temple's monks, it is draped in saffron robes.  On the right, my quiet sip of Angkor Draft beer at a sidewalk cafe was interrupted by this elephant and his rider.  The restaurant staff rewarded the animal by feeding it an entire bunch of bananas. Note the mahout dismounting.  An evening stroll along Phnom Penh's riverfront is pleasant as the day cools.  On the right the Mekong river can be seen flowing seaward to the Vietnam coast. 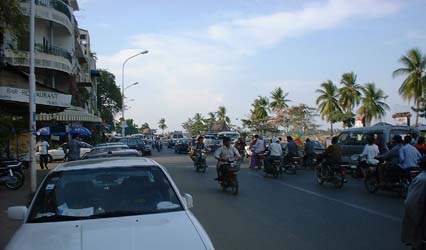 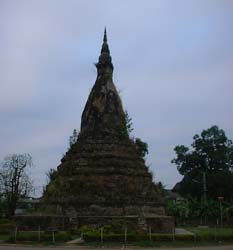 Across Indochina, and in many other parts of Southeast Asia as well, the motorcycle is the main means of transportation for the rising middle classes.  Above is shown a typical street scene.  At left is the ancient That Dam Stupa, shrine of the fearsome Nagas (mythical dragons) that protect the capital city of Laos, Vientiane.  The capital is also home to beautiful French colonial architecture such as the house shown in the center, moldering away on a side street near the downtown area. On the right, jovial Uy Thon, Director of the Technical Department of of Cambodian National Television, who served as interpreter for our Cambodian seminar in 2000.

Back to the Travels in Asia Homepage

Return to the W8MHV Homepage