I recently realized that of all the radios that I have gathered over the years, Yaesu gear constituted the greatest number. This was not a conscious focus, but a by-product of serendipity and my curiosity about radios that were important innovations in their day. I am obviously not alone in this preoccupation as anyone who surveys other Website will find plenty of other postings concerning radios like those below. This is not to say that I concentrate on that brand. I like Icom and have had some of their products, including my IC-7800 and IC-781. I also admire Elecraft equipment and own most of their major offerings. (I intend to post a separate page on Elecraft radios.) 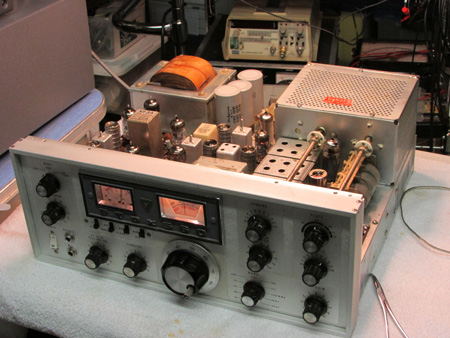 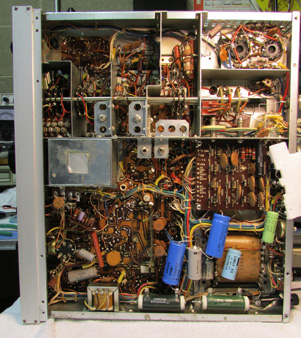 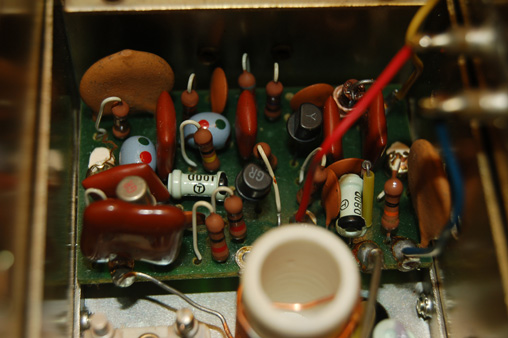 Starting with the oldest of my Yaesu radios, here is the FTdx560. This piece of equipment was manufactured in the early 1970s and was quite similar to others in the series such as the FT400, FT401, and FT560. I used a FT401 as a parts radio from which I scavenged a number of components. These radios were the result of an effort to duplicate at a low cost the convenience and commercial success of the Collins KWM-2. This restoration was a difficult project because the original design had numerous shortcomings and the unit I worked with had many problems. For instance, at some point one of the final tubes developed a grid to plate short which took out the grid bias supply and caused the HV RF choke to cook to a cinder, as seen in the final photo above. The VFO in the preceding photo was also a headache because of intermittent operation. Complicating things was the fact that the actual circuits were not as documented in the operating manual schematics; it quickly became a seat-of-the-pants kind of overhaul. The IF in this radio was actually 100 kHz different from that specified, likely due to severe birdies in the original design. The AGC units in this series of radios varied quite a bit from model to model as Yaesu tried to find a simple compromise that worked. The AGC in this radio is quite primitive and doesn't remain stable as the temperature in the cabinet rises. The bottom view shows the new electrolytic capacitors I had to replace. Despite all of this, I managed to get the radio to work fairly well, but as one can probably tell, it is not one of my favorites so it sits on a shelf rather than my operating desk most of the time. 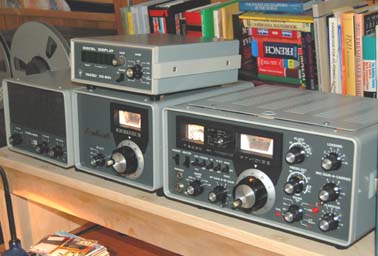 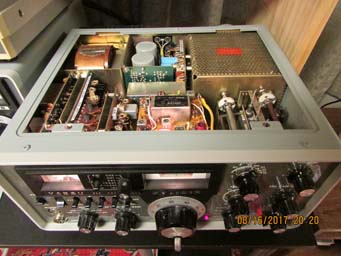 The breakthrough product for Yaesu was the FT-101 series, a radio produced in several variants--FT-101E, FT-101EE, FT-101EX, and FT-101F. There were manufactured in the mid-1970s. All were hybrid units using vacuum tubes in the output stage but solid state circuits everywhere else. It was a much more sophisticated design than the previous transceivers. Today, a drawback to these radios is that they made use of sweep tubes (heavy-duty vacuum tubes used in the sweep circuits of cathode ray tube television sets) in the output stage. Although this was advantageous in the 1970s when these tubes were cheap and abundantly available, their availability has dwindled and their cost has skyrocketed. Some hams have tried converting the output stage to 6146 tubes, but for various reasons a successful conversion is rather difficult to make. Even so, these transceivers were rugged and reliable. In contrast to earlier radios such as the FTdx560, it was far less prone to frequency drift. My unit was purchased in good condition and required little more than cleaning and alignment. An innovation that proved popular was the external digital frequency display. Analog frequency readouts are always hard to interpret precisely, and the new digital displays eliminated that issue. Additional accessories included an external VFO that afforded split frequency operation, and an external speaker with phone patch. The station with these items is shown here. 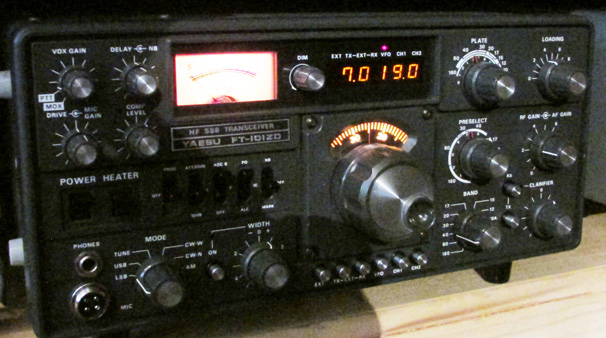 There was another model in this series, but it bore little resemblance to the original and was designated the FT-101ZD. It incorporated internal digital frequency readout and more advanced circuitry. Control layout was also different, though it retained the stability of the other FT-101 rigs while offering enhanced audio. It is still a pleasant radio for casual operations. 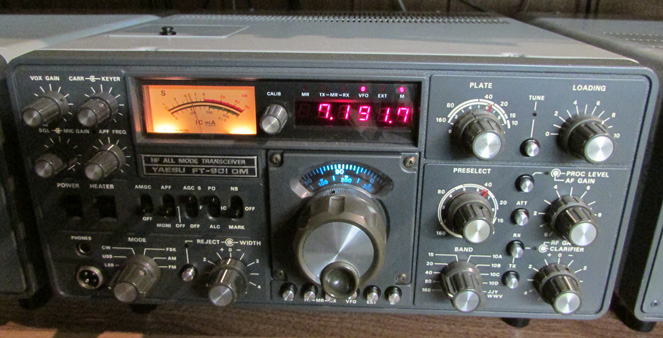 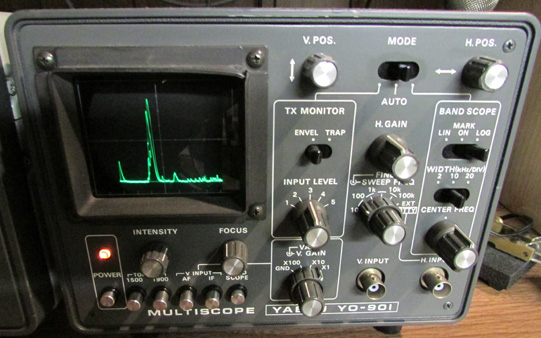 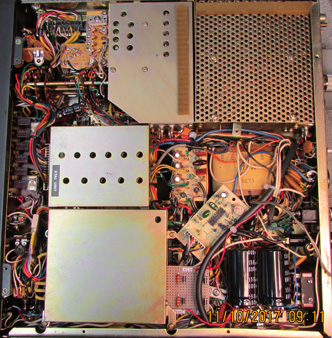 The FT-901 DM was a product Yaesu offered near the end of the 1970s. It was an evolution of the FT-101 series, although it was quite different in terms of circuit design. It is notable in that it offered an external VFO with provisions for 40 frequency memories. In addition, it introduced an external unit that could display activity on a segment of a band (at that time commonly referred to as a panadapter, nowadays more often called a bandscope or spectrum scope). This was not entirely new, but it pioneered the concept in an integrated station and set the stage for the Icom IC-781 and subsequent high-end transceivers equipped with such spectrum displays. Like the FT-101 series, the FT-901 DM used vacuum tubes in the output stage, but unlike the FT-101, it used a pair of 6146s in the final amplifier. The unit I acquired had a high voltage supply that had been damaged by a failure of the smoothing capacitors. Apparently, this has been a frequent failure mode for this transceiver and there are many reports of similar problems on the Internet. Oddly, the FT-102 employed a similar power supply circuit but failures did not seem to be an issue with it, so I surmise the problem lay with the capacitors Yeasu sourced for the FT-901dm. In the photo of the underside of my radio, you can see the replacement capacitors near the bottom next to the replacement rectifier board.

The next radio in my collection is the FT-102, perhaps my favorite of all Yaesu vacuum tube transcievers. It came to me in a trade that I accepted reluctantly because it had only three bands operational and suffered from other issues. Restoration was time-consuming, but--somewhat to my surprise--very much worthwhile. This radio is arguably the most popular of all the Yaesu radios of this era. It had provisions for WARC bands, the external VFO offered 10 memories, it incorporated passband tuning, among other features. The output stage was made up of three 6146 vacuum tubes, meaning than an output of more that 100 Watts was possible without any strain on the tubes whatsoever. I have heard that some people report using their original output tubes after decades of use. Like all Yaesus of that time, it possessed excellent audio, especially when coupled with its matching speaker, shown above. This is important to me because I have a significant hearing disability and transceivers with poor audio make it difficult for me to hear and understand sideband transmissions.

Because of the popularity of Yaesu equipment, there are many online resources available. Undoubtedly the most popular is the Fox Tango International Users Group, which provides a wealth of information on the entire line of Yaesu equipment. 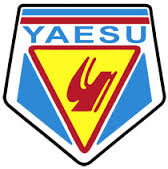